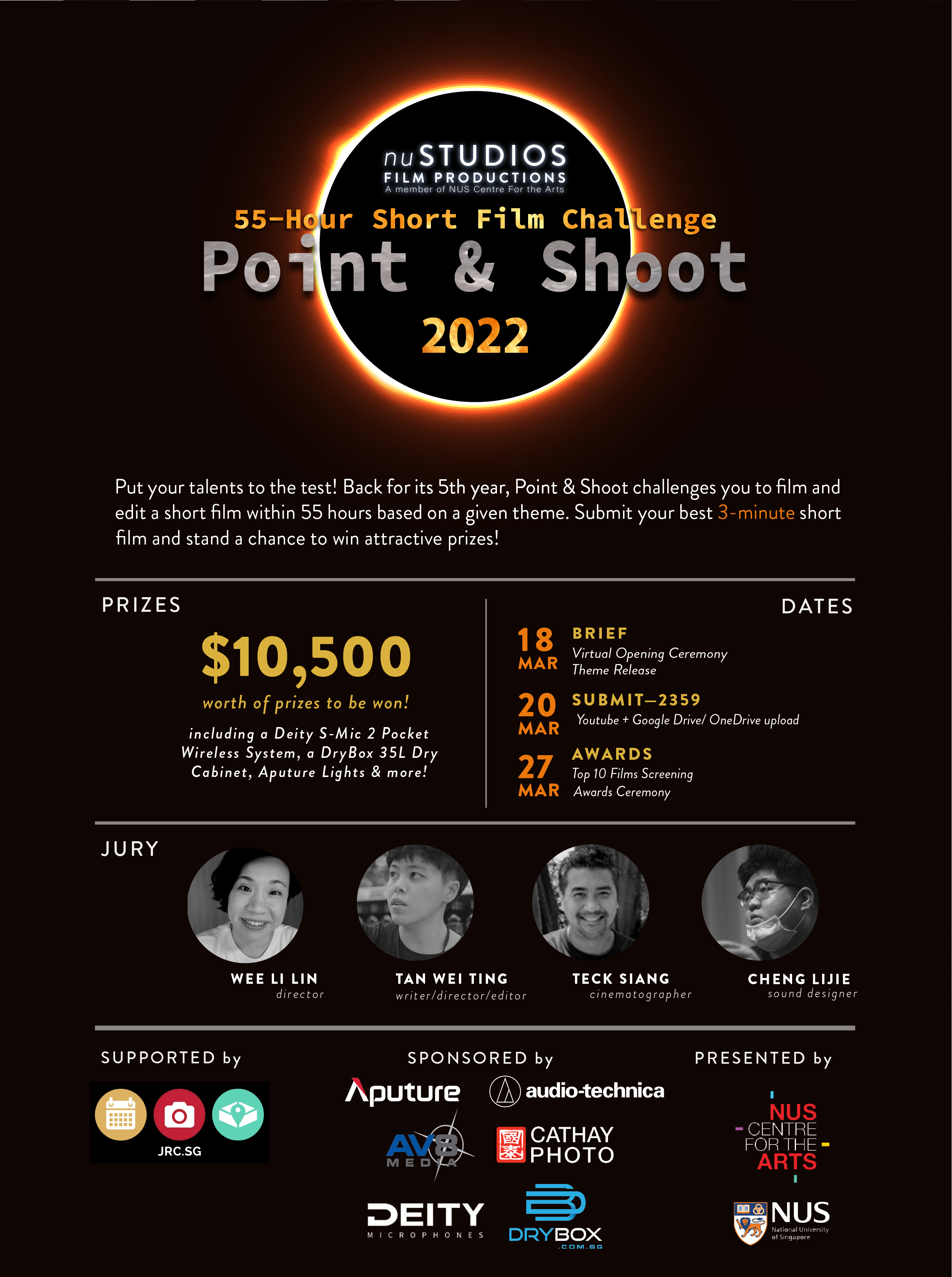 Wee Li Lin is one of the pioneer female filmmakers in Singapore. She has won several awards locally and internationally, such as "Best Director" at the Singapore International Film Festival.

Tan Wei Ting was first trained in storytelling in theatre as part of ARTivate, the youth wind of a local mandarin theatre company. Her directorial debut “CA$H” (Director, Writer & Editor) was selected for International Competition at the 41st Clermont-Ferrand International Short Film Festival in France

Learn More about our Jurors!
The prizes

Attractive Prizes to be won

Who can participate in this competition?

The competition is open to:

- Full/part-time student(s) aged 16-35 (before 31 March 2022);
‍
- is/are currently enrolled in any post-secondary or tertiary institution in Singapore. Examples; Polytechnics, Junior Colleges, Centralised Institutes, Institute of Technical Education (ITE), Universities (local and private) and arts institutions;
‍
- is/are a foreign student on an exchange programme at a local (Singapore) tertiary institution for the duration of the competition;

- is/are a student of a post-secondary or tertiary institution in Singapore graduating in 2022 (includes those awaiting commencement or official results collection, and those who have commenced or received results this year);or is currently an enlisted member of the Singapore Armed Forces undergoing Basic Military Training (BMT) or National Service (NS).

What happens in the event that a member of the group does not meet the criteria?

The entire registration application will be rejected. The remaining group members who wish to continue participating will have to reapply, while ensuring all members meet the criteria.

What are the works qualified to submit for Point & Shoot 2022?

Only short narrative, documentary and animation films no longer than 3 minutes (including opening and ending credits) are accepted for submission. The film must also be shot during the competition period; from the release of theme during the Opening Ceremony on 18 March 2022, until 11.59PM on 20 March 2022.

Who are post-secondary students?

Post-secondary students refer to students studying in Polytechnics, Junior Colleges, Centralised Institutes, Institute of Technical Education (ITE) and other tertiary institutions based in Singapore (including public/private universities and art institutions). The competition is open to students from non-media backgrounds.

Will works outsourced to a company or an individual for completion be qualified for entry?

Other than professional actor(s) engagement and equipment rental, the submission cannot be outsourced to a company or professional individual(s) for completion or enhancement.

A submission may be disqualified from the award it is being considered for should the work be outsourced to a company or professional individual(s) for completion or enhancement.

Who can submit an entry?

A submission may be done by a student representative (on behalf of team members).

How many entries can I submit?

Participants are only allowed 1 submission per team. Each participant can only be part of one team.

Is there a limit to the number of people in the team?

All teams must include a maximum of 5 members per team, this is in lieu of social distancing requirements for Covid-19 as stipulated by the government regulations (may be subjected to changes by the government). There are no minimum members required.

Are there any rules regarding filming?

All teams must follow the social distancing guidelines while filming. E.g. Only having maximum 5 members per team and maintaining at least one (1) metre distance between participants.

Are there any participation fees?

There are no participation fees for Point & Shoot 2022.

Is there a theme that the films must adhere to?

The theme will be released to participants during the Opening Ceremony on 18 March 2022.

Can I enter a short film that is not in the English language?

You may enter a short film that is not in the English language. However, all non-English submissions must contain English subtitles.

How can I proceed to submit an entry?

When is the deadline for submission?

Submission for the competition closes at 11.59pm / 2359hrs (GMT +8), on Sunday, 20 March 2022. Participants are advised to begin submission/uploading of their completed films early to avoid any technical issues.

What are the format requirements of the film for submission by participants?

Can I submit a film that has been submitted to other film competitions?

No, submission of films that are already submitted to other film competitions is not permitted.

Can I submit my film to another film competition after submitting for Point & Shoot?

Submissions will be judged by the jury based on artistic merit, technical merit, its adherence to the theme announced as well as its inventiveness.

Who are the jury members?

Tan Wei Ting
‍
Tan Wei Ting was first trained in storytelling in theatre as part of ARTivate, the youth wind of a local mandarin theatre company. She later enrolled in NTU to study digital filmmaking. Her directorial debut “CA$H” (Director, Writer & Editor) was selected for International Competition at the 41st Clermont-Ferrand International Short Film Festival in France, the largest international film festival dedicated to short films. The film also won Best Directing in the Open Category at the National Youth Film Awards 2018, and travelled to 33 festivals in different parts of the world, including Ireland, Italy, Croatia, France, California, Toronto, Korea, Japan, Taiwan, Hong Kong, India, Malaysia, Indonesia, Philippines etc.  Having formally begun her journey as a writer-editor, Wei Ting loves every phase of the filmmaking process. Other stuff she’s done include “One Hour to Daylight” (Head Writer), an adaptation of four local literary texts into a feature-length screenplay under the Singapore’s Writer’s Festival 2016; web series “Drive” (Editor), which was selected for Series Mania International Festival 2019, one of the biggest international festival dedicated to series; “Still is Time” (Editor), selected for competition at the 37th Uppsala International Short Film Festival in Sweden; “My Father After Dinner” (Editor), which won Best Singapore Short Film at the 26th Singapore International Film Festival’s Silver Screen Awards; “VOTE” (Writer) which won her Best Screenplay at the 3rd cINE65 short film competition; “Passenger” (Writer & Editor) which won the Best Jury Award and “The Longest Distance Relationship” (Producer), which won Best Documentary at the 6th Singapore Short Film Award. She’s also worked with City of Good several times over the years, including “Still Standing” (Co-Directed with Kirsten Tan), a short dedicated to the Singapore Heritage Society, and “Under the Same Pink Sky” (Editor), a film dedicated to the Breast Cancer Foundation. Wei Ting cares about telling honest stories.

Cheng Lijie
‍
Cheng Lijie is a sound designer, production sound mixer and occasional producer based in sunny Singapore. A fellow of Busan’s Asian Film Academy (2018), Lijie’s works have travelled internationally to festivals such as Palm Springs International ShortFest, Busan International Film Festival, Xining First International Film Festival, BFI London and many more.. He won “Best Sound Design” for his work on the documentary “Trespass: Stories from Singapore’s Thieves Market” in the National Youth Film Awards in 2019 and most recently mixed Quen Wong's “Some Women”  which went on to win the Audience Choice Award in SGIFF 2021.
‍
A graduate of Hwachong’s bicultural studies program Lijie is particularly interested in traditional Chinese thought and culture. Aside from film, he deeply enjoys reading and  having tea with friends. Feel free to jio him out whenever you are up for a chat!


Wee Li Lin
‍
Wee Li Lin is one of the pioneer female filmmakers in Singapore. Her films have a signature humour, warmth, and whimsy to them. Li Lin has made numerous short films, two feature films, as well as several telemovies and commercials. She has won several awards locally and internationally, such as "Best Director" at the Singapore International Film Festival. In 2018, Li Lin was commissioned to direct Singapore’s National Day music video "We are Singapore". It was such a hit that it became the highest trending video on YouTube in Singapore that year.Li Lin's films have screened at prestigious festivals around the world, such as the Tribeca Film Festival in New York, Short Shorts in Tokyo, the Udine Far East Film Festival in Italy, the Shanghai International Film Festival, the Hawaii International Film Festival, and many others. Li Lin did her undergrad at Brown University and her graduate studies at NYU-Tisch Asia where she studied dramatic writing under an IMDA scholarship. She also teaches film-related studies at various tertiary institutions around Singapore on a part-time basis. Li Lin enjoys photography, audio books, and going to the cinema whenever she can.

When will I know if my film has won an award?

When is the Awards Ceremony?

Do all participants have to attend the Awards Ceremony?

Group leaders are encouraged to attend the ceremony physically (*subject to availability).

What are the prizes for the winners?

Will award-winning films be screened to the public?

What is the Audience Choice Award?

I am facing some difficulties submitting my film. Who should I contact?

You can send an email to us at nustudios@gmail.com. Please include your name and mobile phone number so that we can assist you as soon as possible. Participants are strongly advised to submit your completed films early before the deadline to avoid any technical issues.

Take part in this exciting event and stand a chance to win attractive prizes worth up to $10000!